How do you prove that an assumption is false? One way is to build upon it step by step and show that it leads to an obviously absurd conclusion. It’s a beautifully effective and counter-intuitive bit of logic known as reductio ad absurdum and is used throughout philosophy and mathematics all of the time.

In the last few weeks I believe we have finally completed exactly one such type of proof. And our starting assumption was that an ever more globalized economy is a good thing, and that there are many new opportunities created for all.

Multinational companies have of course benefitted from ever-increasing connectivity and exploited free flow of capital and goods. Yet as company’s power has exceeded that of many governments, they have found ways to pay less and less tax, so that they have become in many cases completely disconnected and unaccountable to the places that they both sell to and buy from.

The chart below demonstrates one of the by-products of this current form of globalization is that average incomes have stagnated since the early 1970’s whilst net productivity has continued to rise. The benefits are clear but have been accrued by a smaller and smaller segment of society. 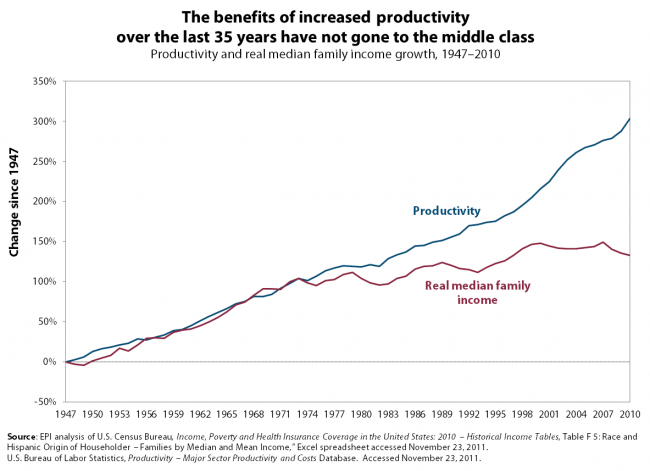 The lower and middle classes in our globalized world have just learned to cope with or ignore this increasing inequality and decreasing social mobility, in the same way that if you place a frog into cold water and slowly heat it, the frog will simply allow itself to be boiled to death.

Both of these pivotal decisions appear set to harm the futures of those who voted for them the most. But in doing so the electorates were literally sabotaging their own prospects, perhaps because there was simply no other way to make their voices heard.

But there is something to be said for hitting rock bottom. It means that you simply cannot go any lower and continue as you did before. It means you have no choice but to experiment and see what works; in other words it demands innovation.

“Only a man who knows what it is like to be defeated can reach down to the bottom of his soul and come up with the extra ounce of power it takes to win”. Muhammed Ali.

As this recent article argues, I believe we need to reinvent globalization so that both opportunity and accountability are tightly coupled on a global scale. It is no longer acceptable to just sell products in a country without paying tax there. Likewise it is unacceptable to transplant production to cheaper markets without looking after the prospects of workers both at home and abroad. And it must not remain possible to plunder and pollute this planet without being held to account.

Unlike governments, companies are exposed to the daily democracy of the market every day. If they don’t behave responsibly then we need to get better organised and to simply stop buying their products. And it requires bold leadership that knows that every organisation needs to behave more responsibly as they become more transparent to shareholders, customers, employees and society.

“If you have to be naked, you had better be buff.” Don Tapscott

In the past 18 months we at 100%Open have been involved in designing and running a number of programmes for global companies (for example the Go Detroit Challenge with Ford and the UBS Grand Challenge) which strive to achieve social impact through commercial capabilities. Not philanthropy borne of guilt for previous misdeeds; or corporate social responsibility about everything except the core business; rather a genuine win-win realising new commercial opportunities whilst delivering social impact as a deliberate by-product.

It’s still early days but I think we have no choice but to be more open, not less. It requires us to build more bridges, and fewer walls. And if we do then a more humane and truly global model of business will emerge. My hope is that amongst all of the absurdity of 2016, it forces us to reboot globalization so that becomes a force for good for all, and not just for the few.