No grazing, no milk

As I was enjoying a new activity today, baking sourdough bread, my mind turned back to the amazing Do Lectures that Roland and I went to last week. Our plan was to get some time to talk, think and graze in West Wales – a rare moment of quality time in the two years of frenzied 100%Open activity. 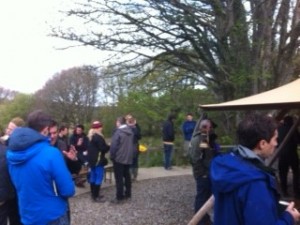 Some hope.  The Do’s turned out to be full on with 30 lectures in 3 days and loads of activities before (like Meditation) and after (like Norwegian pole-walking). More compelling though was talking to the 80 or so others who had made their way to a damp celtic corner from as far away as California and Finland. Each of these individuals that I spoke to had a fascinating story.

They were all doers and my diary’s filling up with post-do coffees in the coming weeks. Let me give you a flavour of the lectures – one tweet at a time.

Gav Thomson – What are we going to tell our kids? / Do it today

Bobette Buster – Great films are about transformation. Watching someone become fully alive or the living dead.

Shan Williams – £4m leaves Cardigan a year to the supermarkets. / We pay for water and electricity that we used to have ourselves.

Catherine Powell – Meditation makes us realise that we are much more than we think we are.

Chris Heathcoate – The future will be confusing. / Genetics is big data, humans are 3.3bn bits, a CD or a bookcase of information. / 1 gene determines whether you can smell asparagus in your wee.

Wilson Miner – What was your time-to-screen this morning? /The internet gives us 3 superpowers: Find anyone; Find Anything; Massive processing power.

Jane ni Dhulchaontigh – We adapt our houses, but not our stuff. / The hacker way is how a farm works.

James Bridle – The Wikipedia article on the Iraq war and all its revisions fills 12 volumes, the equivalent of an encyclopaedia.

Joel Bukiewicz – All the marketing and packaging is just the furniture. If you don’t have good work you don’t have the house. / I’ll never have 50 employees but I would love to have spawned 50 new companies.

Ed Brown – I meet myself where ever I go.

Marion Deuchars – Every office should have a playdesk.

Tim Drake – the wisdoms of youth are openness to change, openness to people, action orientation and having fun. / Try going 24 hours without saying anything negative.

Brian Robertson – Evolution is smarter than you. / Organisations design themselves

Tim Smit – I have banned the word innovation. The real innovation is to remember trust / There’s only one answer to the question what’s your exit strategy? Death. / The most important word in the next 10 years will be beauty / The moment you put your life on the line you will success because it matters / Tell future truths.

Michael Acton-Smith – We were going to call Moshi Monsters Puzzle Monsters but that was too educational.

Tom Herbert – The word companion comes from the french to break bread together. / Slowly risen bread has better flavour and is easier to digest.

Sasha Dichter – Try to decide each day not to be generous.

William Rosenzweig – Practice not doing and everything will fall into place. / Ways to practice not doing are to unplug, sit, listen, give, garden. / Writing your stories is a way of staring your bullshit in the face.

Mike Beeston – You need context time. / Doing and meaning need to be in balance. The dotcom crash was too much doing, not enough meaning. / Web 3.0 is about sensors.

Richard Askwith – How reckless are you prepared to be?

Andy Puddicombe – Take 10 minutes a day to do nothing.

Anne Felton – Dressing like you don’t care is a trend.

Sean Carasso – We are only boys. How can we be enemies? 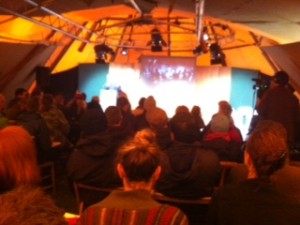 Look these people up. They’re the future. Which brings me to where I started. When Tom Herbett offered to give away a few jars of 55 year old leaven (yeast mix) there was a rush and I missed out. Someone noticed my disappointment and later gave me his jar which I’m baking with now. I think life and work ought to be more like the Do Lectures.

ps the sourdough bread was fantastic.  Beginner’s luck no doubt. 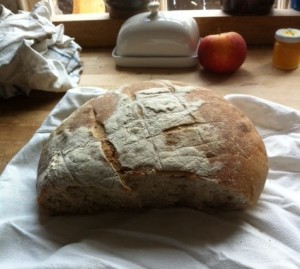