In Praise of Paradox

I’ve always been fascinated by a good paradox. Whether it’s staring at the wonderfully impossible art of Esher, or trying to get get my head around an apparently 2 sided object which only has 1 – namely a Mobiustrip (which it really does by the way – try it). 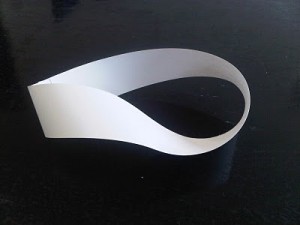 As a student I learned more about how paradox is central to philosophy and mathematics and science, best exemplified by Bertrand Russell’s famous paradox – my favourite articulation of which goes as follows:

The barber shaves all the men in the village who don’t shave themselves. Assuming the previous statement is true, then who shaves the barber?

Anyway, I’ve never really thought of this fascination as much more than a trivial intellectual pleasure, but having just finished James Gleick’s ‘The Information – a history, a theory, a flood‘, I’ve been reminded not only of the beauty, but also the importance of a nice paradox. One example from the book which I hadn’t heard of before is Berry’s Paradox which can be described as follows.

Consider the following list of numbers which each consists of a number of words:

According to wikipedia “The Berry paradox states that arises because of systematic ambiguity in the word “definable”. In other formulations of the Berry paradox, such as one that instead reads: “…not nameable in less…” the term “nameable” is also one that has this systematic ambiguity. Terms of this kind give rise to vicious circle fallacies. Other terms with this type of ambiguity are: satisfiable, true, false, function, property, class, relation, cardinal, and ordinal.”

I find it fascinating that concepts like ‘true’ and ‘false’ consist of systematic ambiguity. We chase these concept every day of out lives and yet is it a futile race.

Anyway, what have all of these paradoxes got to do with open innovation which is what this blog is usually about. Well we’ve been thinking recently about how can we best codify what we do and it’s not always that easy. The one thing I would say we are good at is being comfortable with uncertainty. I often find it personally quite unsettling but basically the business of innovation is trying to navigate through uncertainty without passing judgement too early.

I’ve lost count of the number of times I’ve been sitting in a meeting where people want to (or want us to) pass judgement on whether something is a good idea or not, to which the answer is usually, we don’t know yet. Whenever faced with a binary choice – left/right, true/false, creative/technical, public/private, black/white – remember the answer is always ‘both’. 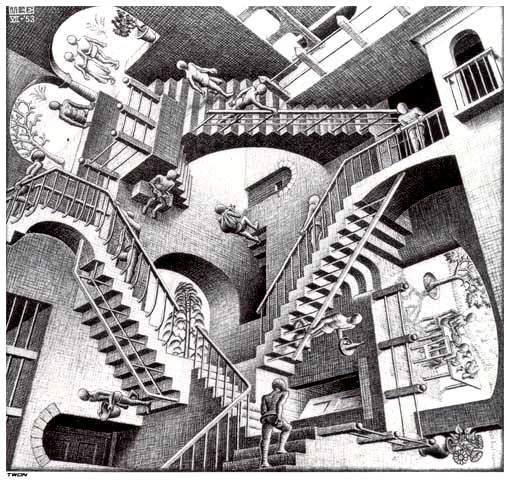 Similarly we run an exercise in workshops around breakthrough innovation where we invite people to figure out the underlying assumption behind an industry or a current business model, and then get them to flip the assumption and work up a new business model based on the inverted assumption. It’s amazing how often it yields really interesting results. For example recently we ran some innovation workshops around the Construction industry where one of the assumptions, in the UK at least, is that people would rather own their own home rather than rent. However flipping that assumption is not only both possible but also profitable – for instance the assumption that people would prefer to rent rather than own underlies the success of businesses such as Spotify and Zipcar.

Finally we ran some sessions with a major UK cancer charity a few years ago who have a vested interest in stopping smoking for obvious reasons. So when somebody in a workshop came up with the apparently crazy idea of cigarettes branded by the cancer charity, you could see them visible flinch at the prospect. However to their credit they didn’t close down this line of exploration too early and it quickly flipped into branded smoking cessation patches instead which ended up being one of the projects they ended up supporting.

Anyway, so perhaps staring at those Esher images as a kid was actually training the brain to be comfortable with paradoxes which in turn is helpful in being comfortable with apparently wrong or contradictory or crazy ideas, which in turn is necessary in unlocking innovation. As Søren Kierkegaard said “the thinker without the paradox is like the lover without passion.”