As of Thursday the 18th of June, our first online Union went live! We had three excellent speakers, two rounds of breakout rooms, and one platform via which many parts of the world were represented and connected. Since 2011 we have hosted a grand total of 36 Union events, but Summer Union 2020 was the first of its kind as it was entirely virtual from farm to fork – from our first brainstorm to the execution of the event itself. So how was it different to our previous Union events? How did it fare in the new territories of virtual networking? And what is a Union event anyway?

Union is a club for innovation professionals, hosted by 100%Open, and its aim is to connect people. We do this by inviting speakers to give presentations on a certain topic or theme – the most recent being Innovation Is No Longer A Contact Sport – followed by Q&As and general networking time.

Unions are informative and fun with drinks, food, and music, affording everyone the chance to connect with each other. They are spaces where fascinating and accomplished individuals in the innovation world can come together to make new friends as well as strike up partnerships or find collaborators.

Described like this, it seems like a difficult thing to transpose Union to an entirely virtual experience. 100%Open has had a decade to identify and refine what works best in offline collaboration, but we have had much less time to take online work through the same process. Even though the past few months have featured an exponential growth in this regard, there is still so much to learn, and our online Summer Union was the perfect place to do so.

We considered the aspects of a Union event that would be difficult to replicate. For example, serendipity and the organic development of ideas are much harder to do through a screen. Much of the information shared in a conversation happens via social cues and body language, and In Real Life (IRL) conversations are not stunted by buffering internet connections or multiple people speaking at once then all falling silent as we try to figure out who should be the next to speak. This can make it a jarring and unproductive manner of presenting where the aim is to collaborate and bounce ideas off one another. No one wants to be the one to interrupt, so we end up losing our trains of thought or not listening to others as we hold on to our points, and it becomes a matter of people talking at each other instead of with each other. With this in mind, we offered three solutions in Summer Union.

First was the Raise Hand function, which allowed a participant to bring attention to themselves in a discreet way that did not interrupt the flow of conversation
Secondly, we had various chat boxes where people could interact with each other and ask questions of the speakers without any diversion from verbal communication
Lastly, we had two instances of randomized breakout rooms. This facet was the most interesting as each room held around five people, giving us the chance to introduce ourselves and have a good old-fashioned chat. 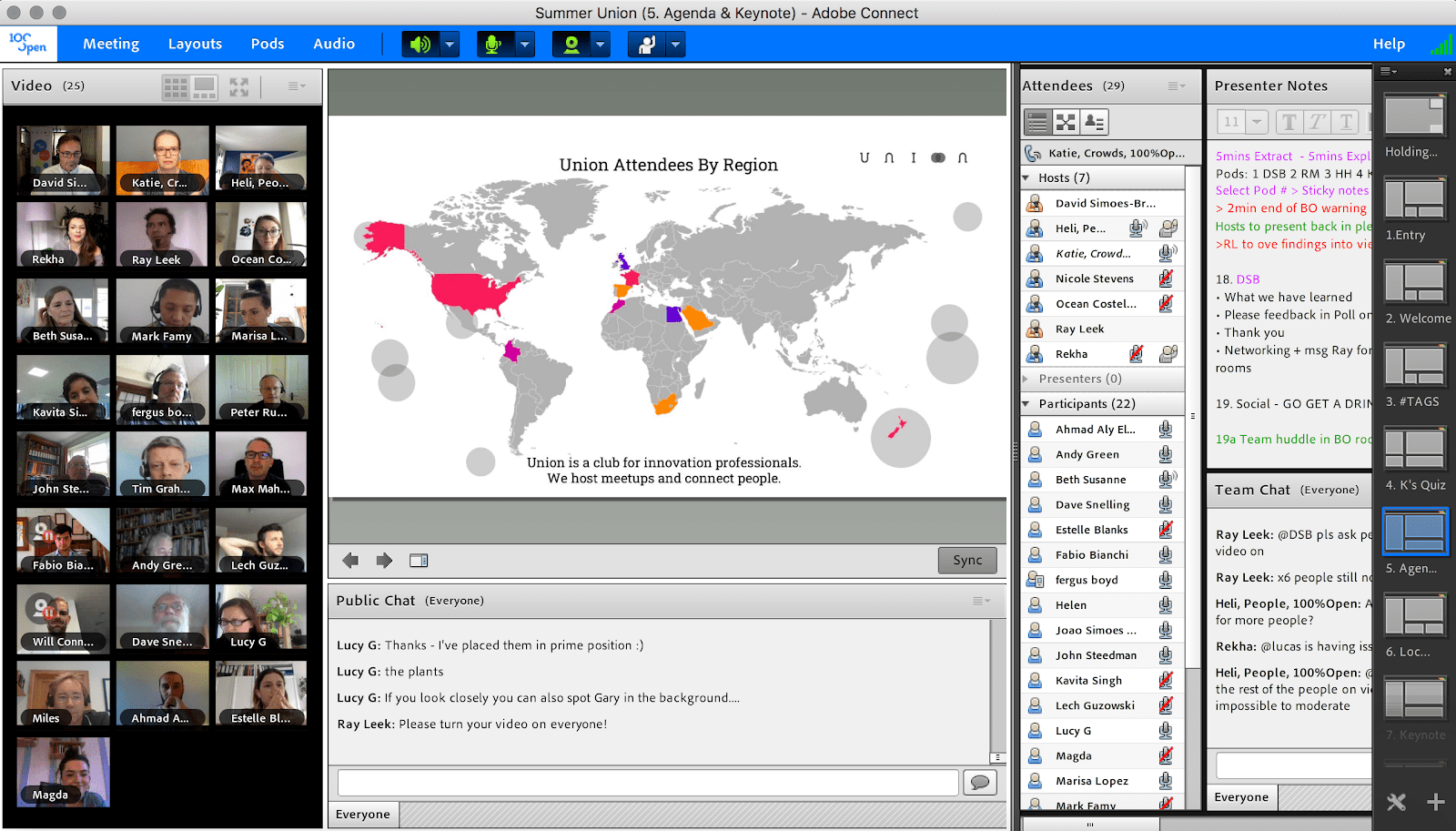 The breakout sessions also had pre-determined activities set up. The first one was a simple get-to-know-me exercise, where each participant was asked to write their names, companies, and their Give/Get. We swear by Give/Gets in our (metaphorical) office, as it enables us to start the day with transparency and support. Each person puts forward what they can offer that day as well as what they need, and in this way we participate in a communicative workplace where boundaries and time are understood and respected. The same and more goes for Union, where we were able to match up people with mutually beneficial Give/Gets. This allowed for the difficulty of not being able to mingle and put across individual intentions face to face, whilst also cutting to the chase by displaying each participant’s self-identified intentions and, therefore, making connections easier. 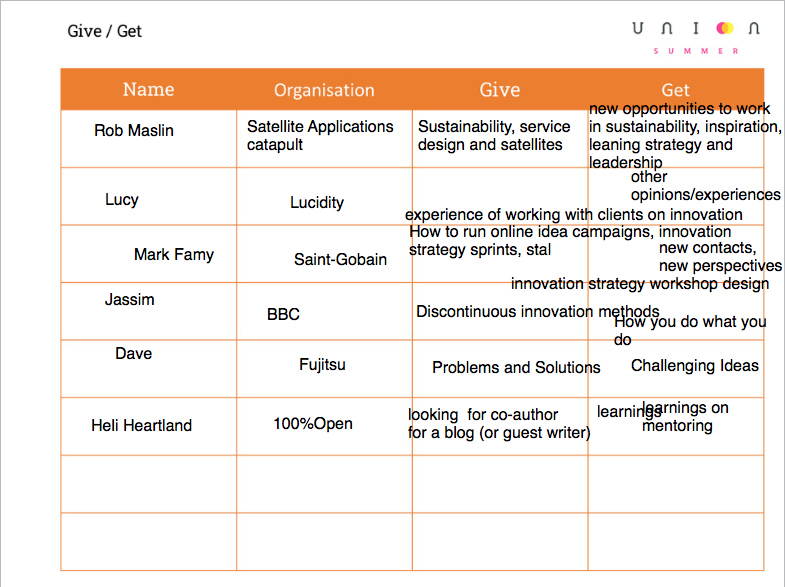 The second breakout session was around the topic of how to fashion a new innovation process, exclusively online. We brainstormed the three crucial stages of innovation:

This is where we got slightly meta, asking participants to explore the idea of a non-contact innovation programme. We used our post-it note brainstorm, typically done with paper (post-it) and pen, and encouraged everyone in their respective groups to add to the virtual coloured squares in order to share their input. The hilarity of people choosing to type in the same box simply added to the camaraderie of the whole experience, leading to a discussion of ideas rather than isolated thinking done to the soundtrack of keyboard tapping.

You can see the fascinating outputs here in our Summer Union 2020 Report along with Unionistas Lockdown Learnings and Give/Gets. A report! Now that’s definitely a first.

The Union of summer 2020 was definitely a prototype, but it was a self-aware one. We knew that to make it successful, we would have to make the experience independent to the Union we know and love whilst maintaining its core values and purpose. We had three incredibly talented and knowledgeable speakers – Beth Susanne with New Rules for Uncertain Times, Estelle Banks with Challenge-Led Innovation During Covid-19, and Mark Famy with How focusing purposefully on constraints can lead to important (and often surprising) innovations – giving presentations and taking questions, we made spontaneous connections with others whom we would have perhaps not otherwise met, and there was a 93% engagement rate from participants. We all still have much to learn when it comes to online networking and how to make it as effective as possible – e.g. how to read body language through a screen, how to facilitate spontaneity in a premeditated and structured context, how to send everyone a 6 o’clock beer and canape – and our Summer Union was a wonderful, collaborative place to start.