The size of a business – whether it is measured in terms of employee numbers or revenues – is often incorrectly taken as a proxy for how a successful or reliable a business is. Whilst we are all guilty of the same prejudice I increasingly think this is a deeply flawed assumption that needs to be actively challenged.

When we launched 100%Open just over 2 years ago, we used to pretend we were bigger than we are. The reason was mainly because it was simpler than explaining the networked way we actually work. Now we’ve come full circle and take pride in being much smaller than people expect. We have realised that this networked approach that we are operating by is to some extent the business model that we advocating with our much larger clients, so have started to turn this into a feature rather than something to potentially obscure from view. 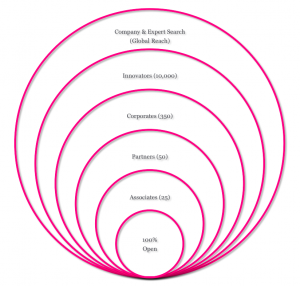 In summary we have no office, no staff, no assets, and no hard IP. We do however have 25 associates, many of whom work with us almost full time, 50 partners who we regularly work with on projects, and thousands of ‘weak ties’ (corporates, investors, innovators etc) who form part of our 100%Open ecosystem whether they realize it or not. Once this ‘mesh network’ operating model is understood, people generally really like it as it is better, cheaper, faster way of working than with other more ‘established’ operators.

Henry Chesborough talks with conviction about the Hollywood film studio business model being the business model of the future. Essentially teams of freelancers (directors, actors, technicians etc.) come together for a defined period of time to produce a defined product (in their case a film) and then the team disbands at the end of the project.

Friends of mine who work in the TV and film industry assure me that this ‘on again off again’ way of working is exhausting and also lacking in security, however it certainly sharpens your skills as you are only as good as your last job and there is no hiding in an industry where your only real asset is your reputation. Whilst I share the concerns about the downsides, there are undisputed upsides – most notably autonomy and agility.

We have however reached a turning point as a business where we are asking how sustainable and scalable this model really is? It’s tempting to go down the traditional route of getting an office and recruiting permanent staff but we have resisted the urge so far and I’d genuinely welcome advice or examples of companies you have grown cleverly and collaboratively without the ‘overhead’ of a traditional hierarchical organization.

So it was timely that I was invited to talk about some of these themes and also moderate a panel discussion at the Creative Innovation Summit yesterday. Philipp Karmires from Google gave a great talk on the rules of innovation – one of which was ‘Share everything you can’ – and showed how they have grown to be a hugely successful company through an open and networked approach. And Sasha Sauer from Towerbyte gave an example of a network of IT companies in Germany are blending the best of entrepreneurial smaller companies with the power of an extended and trusted group of collaboration partners.

I don’t think anybody really understands this stuff properly yet as it requires a radically new business model and mindset, not to mention a very different approach to intellectual property. However I want to give the last word on the subject for now to Joe Pine who also gave an amazing talk at #thsummit on experience innovation which I urge you to check out. He said (and I’m paraphrasing) that in a chain of command (i.e. traditional hierarchical organisations) you are only as a strong as your weakest link, however in mesh network you are only as weak as your strongest link. I know which one we’d rather be. How about you?