100%Open has had a run of three really successful online crowds recently that appear to have been of above average productivity and intelligence.

For example we’ve run our first Russian community for P&G household care brands and have kicked off another P&G community in the UK for laundry sector. And closer to home Water Talkers, a community for UKWIR tasked with finding new ideas for saving water, was highly productive. From 350 users in just 4 weeks we had 366 ideas, 5,549 comments and almost 15,000 page views. The quality of the final concepts was enough to put professional innovation companies to shame!

These crowds were run on different platforms, about the same size as previous crowds and facilitated by different people. So what made them so good? Are we just getting better at running crowds or is there some other secret sauce? 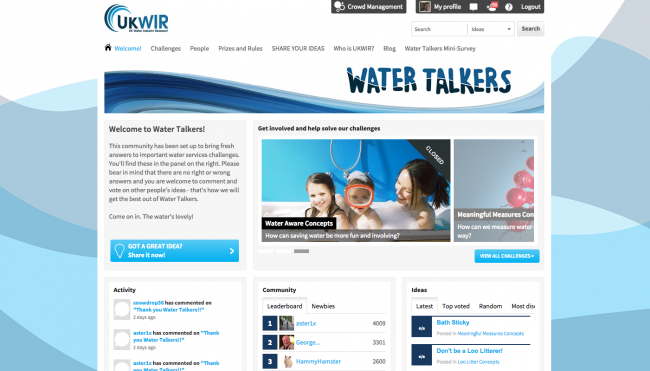 I was reminded of the work done by the MIT Centre for Collective Intelligence. This body’s main research question is:

“How can people and computers be connected so that—collectively—they act more intelligently than any person, group, or computer has ever done before?”

Great question. One of the projects they are running at the moment is is the Climate CoLab whose aim is to harness the collective intelligence of thousands of people from all around the world to address global climate change. Since 2013 they’ve attracted 30,000 members and come up with practical ideas like apps to compare community energy use, green jobs training and different tax regimes to reduce energy use.  In this blog, the Centre’s founder Thomas W. Malone gives us some fascinating insight into what makes crowds clever. In it he draws out three factors that correlate with intelligent crowds.  These may surprise you.

They measured social perceptiveness using a test developed to measure autism – the “Reading the Mind and the Eyes Test” which works by letting people look at pictures of other people’s eyes and try to guess what emotions those people are feeling. When you have a group with a people who are good at that the group as a whole is more intelligent.

The second factor  was the evenness of conversational turn taking. In other words, groups where one person dominated the conversation were, on average, less intelligent than groups where the speaking was more evenly distributed among the different group members.

3. The percentage of women in the group

They also found that the collective intelligence of the group was significantly correlated with the percentage of women in the group. More women were correlated with a more intelligent group.  It’s a more or less linear trend. That is, more women are better all the way up to all women. It’s important to note that women do better on the social perceptiveness test too.

Looking back at our successful crowds, these principles rang true. They seemed particularly socially perceptive and emotionally intelligent, especially the Russian crowd. Our facilitators took extra care to give everyone in each community a voice. And yes, they were about 80% women!