It was half way through a road trip, in Queenstown New Zealand when I finally did my first and only bungy jump. I had been thinking about it for months, and realised that I was getting more and more nervous the closer we got and I still wasn’t sure if I was gonna go ahead with it. But I did and whilst I didn’t enjoy it sufficiently to ever want to try it again, I am glad I was able to overcome a fear rather than be trapped by it. One thing that the guy strapping my legs to the chord said to me as I was about to jump stuck with me namely “It’s just one step.” And he was right…* 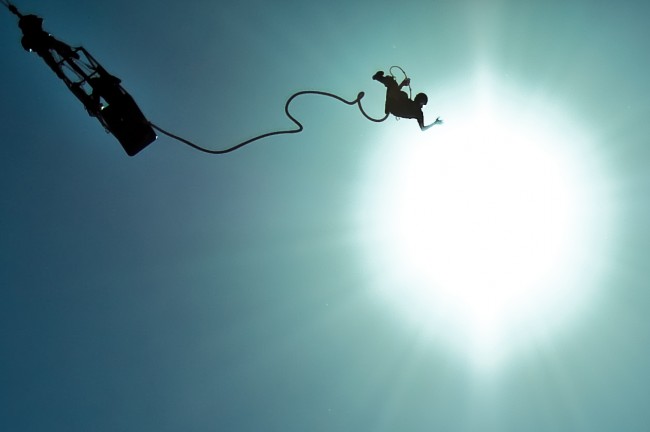 Anyway, I now think that most of what’s really important we are mostly unaware of before its too late. There is so much complexity in getting almost anything done these days that it’s generally much easier to hide behind meetings and consultation and report, but as a result not actually do anything. Just one step towards the unknown without necessarily knowing what is going to happen is very difficult, but once you do, the other pieces do fall into place through a gravitational pull.

“The challenge of 21st Century leadership is about learning to give up control gracefully and without loss of face.” Peter Drucker

I’ve been struck recently with several organisations massively over-specifying their requirements to a point that it squeezes out any potential for anything unexpected or interesting to actually happen. This is particularly the case in putting undue emphasis on domain expertise rather than on capability, skills and process expertise, but in doing so I think they almost deliberately sabotage their own efforts at innovation.

“When designing the perfect mousetrap, always leave room for the mouse.” Hugh Burkitt

So how do you navigate the unknown unknowns without loss of face? At 100%Open we like to think we are like good bacteria, helping you grow a better culture for innovation and helping you figure out what you want to do before you’ve necessarily figured out what you want to do. Sometimes it’s about merely opening up and asking for help, other times it’s about admitting you don’t have all of the answers which can be hugely liberating.

Obviously you’ve gotta check the rope and have faith in the structural integrity of the bridge, but after all it’s just one step…