Exploring the Power of Creative Collaboration

At 100%Open, we like to get out and about. And what could be more relevant than an event described as “a discussion, demonstration and performance on the power of collaboration” titled Creativity and Collaboration. So following a generous serving of burritos on the Southbank, our motley crew headed to the Purcell Room to feast our ears on a selection of talks and performances by musicians Andy Sheppard and Joanna MacGregor, surgeon Roger Kneebone and the writer Margaret Heffernan. 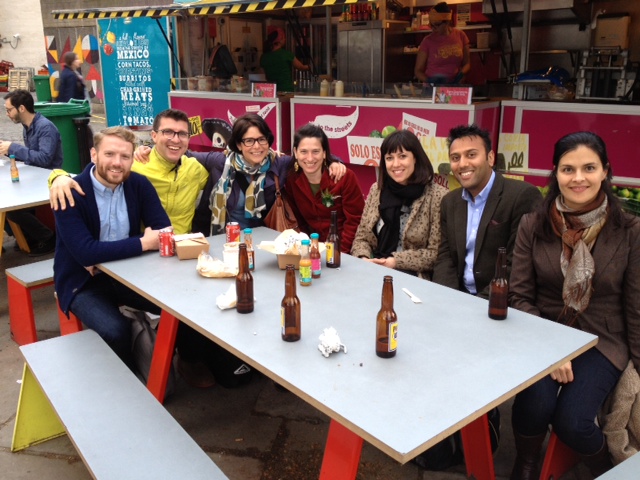 The aim of the event was to explore what collaboration is and how it manifests in the respective domains of the speakers. This offered the audience the unique and fascinating opportunity to identify the parallels, be challenged, gain an insight into how people work together and without trying to sound too grandiose….be inspired. Here are a few highlights from the speakers:

“When we play [instruments] alone we only strengthen our strengths. When we play together we can make magic from our mistakes.” Joanna Macgregor

The pair not only provided a pretty mesmerising performance but described how jazz musicians work together, intuitively, responsively, creatively. They emphasised how much trust and respect exists between them, and it was this that empowers them to take risks, make mistakes. Mostly it was being open to possibility and serendipity. Sometimes collaboration can be an abrasive process and that’s a good thing that can lead to a more exciting and unusual creative output.

“You always know there will be stuff that you won’t know about until it happens. It’s the recovery that matters. The confidence to pull it back on course.” Roger Kneebone

Roger dispelled the idea that surgery is an individualistic operation! Instead he urged that it is always collaborative. Requiring people with different specialities and roles working together with precision and dexterity. My favourite line was “a highly choreographed ballet of hands”. Nothing like Holby City then!

He demonstrated his point by showing footage between an elderly surgical team who when closely observed seemed to move as one – pre-empting each others requests and unconsciously reacting to the most subtle of gestures. An innate awareness of each other!

“It’s virtually impossible to do something interesting alone” Margaret Heffernan

Margaret Heffernan has recently published a book called “A BIGGER PRIZE: Why Competition Isn’t Everything And How We Do Better”. Through interviews, she has discovered that around the world, individuals and organizations are finding creative, cooperative ways to work that don’t pit people against each other but support them in their desire to work together. She touched on these ideas during the talk – asking is there another way in politics, education and business. What is motivating for people and what leads to the best results?

During the customary group hug at the end of the evening, the 100%Open team reflected on what points had really resonated….and it transpired there was a lot! Whilst it made for a slightly lingering hug, it highlighted the shared themes across the presentations.

Collaboration doesn’t happen by accident. It can be a challenging and abrasive process that requires a determined mind-set from the collaborators themselves. But if done right, it can lead to startling synergy, inspiring creativity and incredible results.