How often do you spend too long time on a piece of work but as soon as it’s shared, others are quick to point out inconsistencies in the argument, or spot the typo which you’ve long since missed?

Secondly, what is the best way to find out if two people in a room share a birthday? A software engineer may well propose a solution that requires extracting and verifying participants dates of births from various databases before sorting them in date order using an algorithm, and then finding matching pairs using another algorithm, before counting any matches and giving total. That could easily be half a day’s work, the majority of which consists of getting the data in the first place. Alternatively you could just ask everybody to stand up and talk to each other and form a circle in order of their birthday and see what happens. That takes, in my experience about one minute.

An audience enhances any algorithm.

Lastly, why is it that open source software is often higher quality code than that produced in a closed or proprietary environment. It is well document that the reason is precisely because a) more people have contributed to it and helped to iron out the bugs and b) people tend to do better work if they know it will be reviewed by their peers.

The point I’m making is that we too often overcomplicate stuff simply because we try to do too much on our own. Collaboration is scary as we all don’t want to look foolish, which is perfectly understandable, but often completely counter productive. 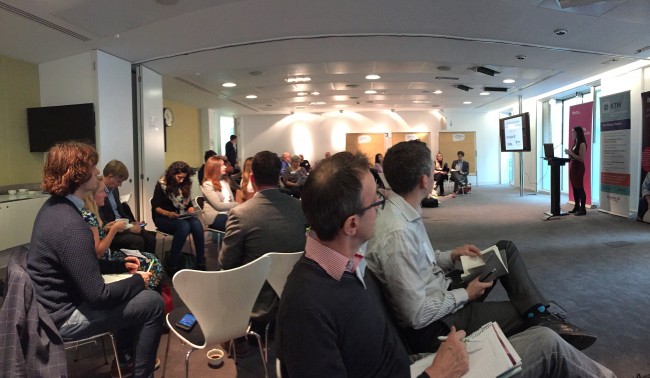 I was reminded of these points yesterday in a workshop yesterday where we were exploring what the innovation opportunities are in a particular sector. The morning consisted of a very high level discussion so by the time that lunch time came along I was tempted to sneak off and make better use of the time elsewhere. However a chance conversation over lunch persuaded me to stick around a little longer and see what happened and sure enough in the afternoon a small group of us had an incredibly productive session where we got to a really interesting place, building on one of the themes emerging from the morning, that was much more specific and really quite exciting.

It reminded me that there is nothing quite like being in full view of an engage audience to get real time feedback on whether what you are doing is right or wrong, or good or bad. We all spend far too long in our own heads wondering about whether to go left or right, and actually an open and honest conversation with the right group of others can be so much more productive.

And when it comes to innovation there is a lot to be said for transparency to help your audience create and shape the decisions you are making. The danger of course is that the audience, becomes a mob, and a herd like mentality kicks in but even that can work in your favour if you channel it the right way.

The best trick we’ve learned is to ask open and interesting questions, and then give everybody a little bit of time to capture their own personal responses individually, and then empower everybody to speak freely and bounce ideas off each other.

The art of collaborative innovation in is to lower your standards (at first).

The perfect algorithm is like the search for happiness, is a worthy ambition almost certainly doomed to fail. The best algorithm I’ve seen is a group of smart people with the right tools and the right behaviours to work together. You can work much faster together and be prepared to look a little stupid sometimes (but not as often as you might think) and be open to changing your mind in light of new information. And then respond quickly to what people say to make them better.

So bring your algorithms out into the open, and learn from your mistakes and leave room for the contributions of others to make them better.