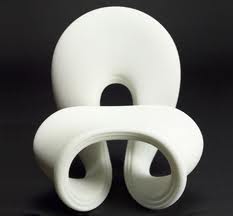 Last night I was very pleased to be invited to be part of the RSA’s event on 21st Century Manufacture. You can listen to the audio here and watch the video here. The event was kicked off with a keynote from Assa Ashuach, a hugely talented designer who creates and plays with digital tools that allow anyone to specify 3D objects within certain parameters. In other words enabling anybody to produce and manufacture stuff. He gave examples from the beautifully designed and single moulded furniture such as the 501 chair (left), to trouser/chairs or chair/trousers (right), or to exotic light shades that respond to their environment (below) . 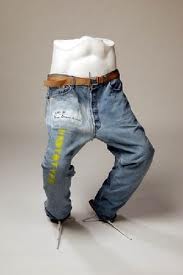 The products were certainly beautiful and I enjoyed learning about his work. The subsequent discussion centred more on whether this democratisation of manufacturing is real or not. The grand vision is ultimately that the era of mass production is over and ultimately it will be affordable and desirable for all – aesthetically, environmentally & commercially – to have small scale production capabilities within the home, or in every town and village etc. Examples such as the global network of Fab Labs are an important step in this direction.

And yet the discussion struck me as remarkably similar in many ways to those that have been raging in the music, TV and publishing industries between professional and amateur content for years. Whilst the web has enabled a long tail of content producers (of which I myself was part for many years as a bedroom music producer creating soundtracks for TV and film) it has also reinforced the mainstream professional end of the industry as we have seen in recent years with the increasing success and demand for live TV or concert experiences e.g. see the success of X-Factor as an example or the huge earning power of top bands touring. 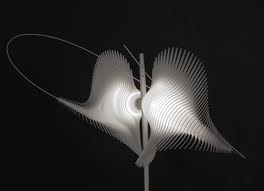 And whilst we shall always need professionals and yet I believe it is dangerous, and a little patronising to dismiss the non-professional manufacturer as a hobbyists. I strongly believe based on first hand experience that that the more the tools of production are democratised, the greater the potential for innovation. As ever I come back to this idea of the ‘Top 1%’ (sometimes called Lead Users) who consciously aware of a need and motivated and empowered to do something about it.

For instance, I wouldn’t wanted a medical condition to be treated by somebody who wasn’t qualified, however I am reminded of the fact that, as a diabetic you once had to be injected daily with insulin by a doctor, which was so inconvenient for one individual that he trained for 7 years to become a doctor just so he could inject himself. This led to the self injection of insulin which has transformed the lives of millions of people. Most people wouldn’t do that, but I’m sure lots of people are glad he did.

“We want to keep these products virtual for as long as possible. It’s air until someone pays for it to be made.” Assa Ashuach

There is a reason why many of the greatest leaps forward in science and economics come from young people, namely they are ‘sufficiently ignorant’ to not know why their ideas are ridiculous. And digital tools have huge potential to make the manufacturing process much more sustainble but I believe also more commercially viable. In my experience, i deas always benefit from iteration, combination and socialisation, so, whilst there is undoubtably a long way to go, it’s time to embrace the possibility of a networked world and perhaps we need to reinvent manufacturing so that it is personal, sociable and sustainable.