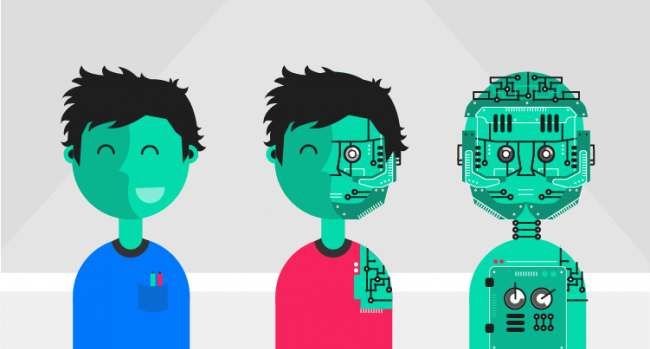 There is a consensus building amongst scientists, technologists, economists and politicians that we are on the verge of entering the next phase of the evolution of our species. Yet there is profound disagreement as to whether this is actually a good thing and there are significant differences in opinion about how this could and should be managed, supported and regulated.

Through a combination of biological engineering, cybernetic engineering and artificial intelligence, humans are already significantly enhancing or exceeding their current capabilities, which has been well documented in many books, media and films. For instance see here the slide deck of a great keynote talk given by Rob Wilmot from one of our partners, Crowdicity that outlines the main narrative.

One of the biggest discussion points at present is in relation to the impact these developments will have on the future of work and jobs. Estimates from the World Bank say that up to 50 to over 80% of all jobs, from drivers to doctors, will be replaced in the coming decades by artificially intelligent machines that will be able to do our jobs better, more safely and reliably. This talk below by Yuval Harari summarises the main argument succinctly and compellingly:

Yet others argue that artificial intelligence will replace certain jobs but also create new kinds of work, such as data interpreters. The reality is almost certainly somewhere in between these two extremes.

Whether this next phase of evolution takes a few years or several decades is undecided, but nevertheless, from an evolutionary perspective, it’s going to happen incredibly quickly. And for the first time in our history, the next phase will not be primarily governed by natural selection. Rather our future lies quite literally in our own hands.

So in considering how we will remain productively employed in an increasingly automated world, I believe we need to be able to answer the following three questions.

1. Where does artificial intelligence end and human creativity begin?

Former chess Grandmaster Garry Kasparov was famously beaten by IBM’s Deep Blue in 1997 and makes the case (in his book Deep Thinking that computers are good at objective, analytical and logical thinking whereas people are good at subjective, strategic and creative thinking. This analysis is neatly encapsulated rather succinctly by Moravec’s paradox, which states that robots find the difficult things easy and the easy things difficult.

“Computers are useless. They only give you answers.” Picasso

In this TED talk by Anthony Goldblum of Kaggle, he concludes that in the future machines will take over the frequent, high volume tasks, with humans focusing on interpreting and understanding novel situations.

We will need to continually map and assess the boundary between human and machine capabilities which will itself evolve over time, but it seems self-evident to advocate a collaborative approach to harness the best of both.

2. What type of superhumanity do we want to create in the future?

It’s helpful to reflect on the fact that humans have come to dominate this planet, not due to our superior intelligence or opposable thumbs as the received wisdom would suggest. Rather in the book Sapiens, Yuval Noah Harari argues that what differentiates homo sapiens from other mammals is our superior storytelling, which enables us to cooperate at larger and larger scales.

The way that we can cooperate with much larger groups of thousands or even millions of other people is through telling stories and creating myths. By myths he means things such as “money” (i.e. This piece of paper has value that I can use to exchange for other things), “brands” (i.e. This organisation is known for and good at doing something that I want and trust), and concepts, such as “human rights” (i.e. here are a set of behaviours which we collectively believe in and that are sacrosanct).

So what stories do we want to be able to tell about our impending superhuman society? I don’t think there is sufficient consensus around this yet, especially from a global perspective, so we need to be having a more rounded dialogue and collaboration around the potential moral, ethical, political and economic implications of the technology, in order to create new myths and better stories.

3. How fair can we really make the future for all of us?

To open up just one of many can of worms that needs to be discussed and decided upon, I wonder which of the current Declaration of 30 Universal Human Rights will still apply in 10 or even 100 years time? For instance will Article 1 of the Declaration still necessarily be true in the future?

All (super-) human beings are born free and equal in dignity and rights. They are endowed with reason and conscience and should act towards one another in a spirit of brotherhood.

It would seem that those with the power, money and influence could create a two-tier society of superhumans and mere humans. The received wisdom in Silicon Valley from Elon Musk to Mark Zuckerberg is that the robots are coming and will take our jobs. So it’s fascinating to hear these arch-capitalists and free marketeers arguing in favour of traditionally socialist concepts such as a universal basic income for all.

Perhaps we need to collectively work together now to create a new Declaration of Superhuman Rights.

In a world where anything is possible the only question that really matters is what do we actually want? We are not thinking about these questions as deeply as we should be, given the technological power at our fingertips.

Beyond the current narrow focus on the inevitability of creating a superhuman species, I believe there is a need for a much broader focus on the social, moral, political and economic framework within which we will live and work in the future.

One of the biggest misconceptions about the future is that it’s predetermined. Yet the future is absolutely not set in stone. Rather it’s created every day by the actions of all of us.

We all should have the agency, authority and responsibility to create the future we want and need. Unfortunately, many people and organisations are increasingly disempowered and therefore simply leave the future to chance.

This behaviour is dangerous with the scale and pace of progress predicted in the coming years regarding our own development as a species. And we have a lot we can learn a lot from history about what happens when the wider political debate has failed to keep up with technological and economic progress.

As the father of three young children, who are already surpassing me in many ways, I’m simultaneously fascinated and terrified about the world they will inhabit and create. But I remain resolutely hopeful whilst utterly uncertain.

“Hope is an embrace of the unknown and knowable, an alternative to the certainty of both optimists and pessimists.” Rebecca Solnit

If we have learned nothing else, it is that nobody is an island and we are better together. And it strikes me that cooperation, openness, transparency and trust are paramount. So let’s be more ambitious with ourselves as the ultimate social species and dream bigger.