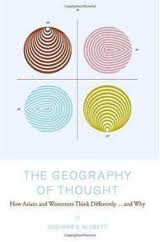 Open innovation is growing up fast. We are noticing a trend from running below-the-radar pilot projects, to rapidly scaling open innovation to become a much more mainstream business practice. In particular, we’ve been asked to do some work recently for a number of clients on how to build global innovation ecosystems and how open innovation is best implemented in different continents and cultures. This is very exciting but also challenging for all sorts of reasons, in particular to do with cultural differences.

To understand how businesses are different in ‘East’ and ‘West’, Nathalie Turner from Entheo (who are based in Singapore), recommended ‘The Geography of Thought‘ by Richard Nisbett which is all about how people think – and see – the world differently based on where they come from. It’s an excellent overview of developments in cross-cultural social sciences (up until it’s publication in 2005) and I would highly recommend it to anybody interested in supporting innovation across different countries and continents. 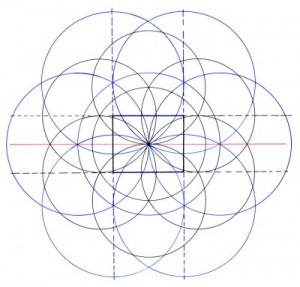 The book contains many fascinating insights into the difference between Eastern and Western thought, which is characterised as seeing the world as either a Circle or as a Line. It traces back the different cultures to the landscape of their origin. For instance he argues that rice farming in China requires irrigation systems that need centralised control and so a more complicated world of social constraints evolved. Greece, on the other hand, consisting mostly of mountains, favoured hunting, herding and fishing which require relatively little cooperation. These are obviously simple caricatures however he goes on to describe the differences in much greater detail, summarised as follows:

“The Chinese believe in constant change, but with things always moving back to some prior state. They pay attention to a wide range of events; they search for relationships between things; and they thing you can’t understand the part without understanding the whole. Westerners live in a simpler, more deterministic world; they focus on salient objects or people instead of the larger picture; and they thing they can control events because they know the rules that govern the behaviour of objects.”

The book then goes on to summarise numerous social science experiments to highlight the different viewpoints. For instance, it describes one experiment where subjects were shown a “dax” – namely a pyramid shape made of cork. They were then shown other objects that were a variety of different shapes and a variety of different substances and asked to pick out their “dax”. Interestingly Americans were much more likely to choose the same shape whereas Japanese were much more likely to choose the same material. In both cases this applies from 2 years old, right into adulthood.

Similarly, when shown 3 different pictures of either i) a chicken, a cow, & some grass or ii) a panda, a monkey, & some bananas, American and Chinese participants were asked to select which two out of the three were most closely related. What would you choose?

All of the above is about how Eastern and Western cultures think different but that also has huge ramifications of how they behave differently too. One fact from the book brings this into stark contrast, namely that in the USA, the ratio of Lawyers to Engineers is 40x that of in Japan. 40x! That is huge difference. The explanation given highlights the preference to resolve conflict in Japan to reach compromise (through mediators) whereas in America the preference is to reach justice (through lawyers).

Related to that, I’ve heard a number of unrelated reports recently about the challenges of implementing open innovation and co-creation strategies in US businesses. I’m told that US business culture is so naturally competitive that it’s actually hard to seriously adopt open innovation as a business strategy. This is of course ironic as that’s where the concept was conceived (or at least named) by Henry Chesbrough.

On the other hand, open innovation does not appear to have taken hold in Asian countries yet to a great degree either as far as I’m aware. And the recent story of the British CEO of the Japanese Olympus Corporation who ‘blew-the-whistle’ on payments related to the acquisition of British medical devices group Gyrus where three transactions were apparently used to cover up prior-year losses highlights the very different approaches to business, when East meets West. 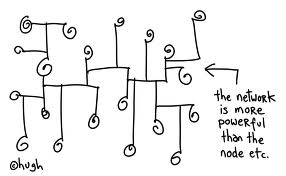 We’ve been saying for a while that Open Innovation only makes sense if it is either local or global. If it is local, people can physically meet up, build trust and collaborate. Whereas if it is global, you can tap into the best people and the best ideas from literally anywhere. If this is the case, then that leaves a challenge as to the role of nation states or even continents in supporting innovation and growth but that’s a whole other debate.

The news is full of news of the impending demise of the Eurozone today and the potential impact that will have on the global economy. Regardless of what happens over the coming days and weeks, perhaps the turbulence and rethinking that will follow will give us a chance to play to our respective strengths as described above.

Maybe, just maybe, western countries/cultures are best suited to be the global competitive economic engine and eastern countries/cultures are the global cooperative social engine. In between is Europe which could be the global innovation engine combining the best of both worlds, acting as a broker, facilitator and enabler between East and West. It does after all contain many of the right ingredients to support open innovation including diversity of opinions, intedepence, and decentralisation. Combine that with a central timezone, a very diverse population with global links, creative and financial hubs, why not seek to re-position Europe as the (open) innovation hub in a global innovation ecosystem? Goodness knows we could do with a different approach after all.

Anyway, I’d be fascinated in your experiences and opinions on any of the above, and even if you disagree with the final flight of fancy about the future of Europe, I would still urge you to look at “The Geography of Thought” if you are at all interested in building global innovation ecosystems.