The Comedy Bow-Tie of Innovation

Traditional innovation theory is full of funnels such as these. The thinking is that lots of ideas miraculously appear and then are filtered down and developed until they are successfully launched into a predetermined gap in the market.

However it is widely acknowledged that this ‘linear model’ of innovation is a long way from reality. See here for lots more on that. Andrew Gaule has suggested here that the model is more like a bow-tie and building on that I’d like to suggest it is more like a comedy bow tie. Confused? Let me explain.

A comedy bow tie spins around in the middle for hilarious (!) comic effect. 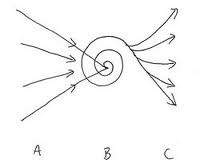 All a bit like a comedy bow-tie don’t you think?

So to stimulate innovation one must:

What do you think? Does this make sense? And can you help us find a better name?