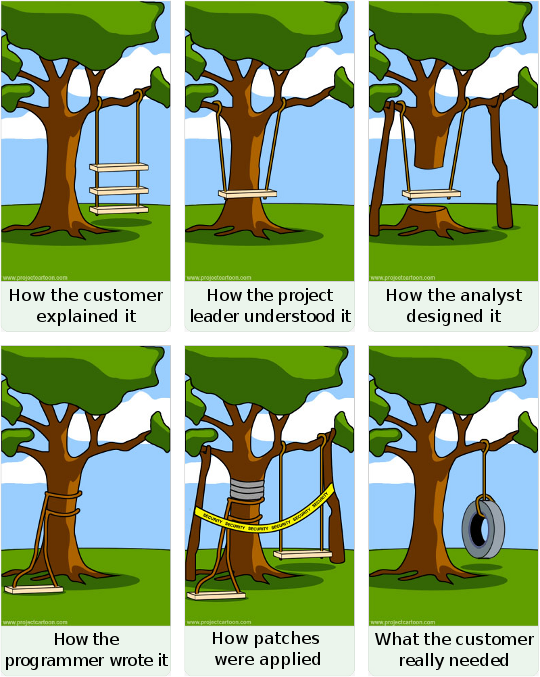 I’ve been hearing a lot about Agile programming recently from a lot of different people which makes a lot of sense to me and chimes strongly with some of our thinking around open innovation and networked enterprises. And as it happened I was pleased to be invited to be part of a Management Today webinar on Thursday where Martin McNulty, from Forward3D, gave a really simple description of the principals that underpin Agile along the following lines:

1. Break down any big task into numerous small tasks of 1 day.
2. Prioritise the tasks and tackle them in order
3. Ideally allocate just one task to one person at at time
4. Kill projects quickly if they aren’t working – i.e. fail fast and cheap.
5. Aim to have daily interaction with the project team members.

“Perfect is the enemy of good enough.” Martin McNulty

It all sounds so simple but I was struck by Martin’s warning against senior people looking for the next Big Idea (he was talking about Marketing Directors but I think the same applies to many others). This is dangerous because, as Nicholas Taleb argues in his book The Black Swan, we are not good at prediction and often the things that impact us most are never foreseen. And so the best way to approach innovation is to seek agility and the principals above are a nice place to start (see here for more detail about the principals that underpin Agile).

This all reminds me of something that Henry Chesborough talks about, namely that one of the most powerful examples of open innovation in practice comes from the film industry, where groups of mostly freelance people (actors, directors, crew etc) come together to innovate/create a new product (i.e. a film) for a period of time and then once the project is completed the team disperses. This isn’t perfect but is significantly difference to the rigid organisational model of most companies. This agility has major benefit that it only uses resources for as long as it’s needed. The major weakness is, of course, that there is no organisational learning, rather any new learning remains in the heads of the participants though I would argue that is often the case in organisations too.

In many ways I think of 100%Open as aspiring to be an agile enterprise in that we are almost entirely virtual with minimal overhead and fixed assets. For instance we don’t have employees, rather a large network of freelance people, agencies and partners who come together to deliver projects. And we don’t really have an office, but do have a network of locations where we are based including the obligatory central London address for client meetings and any post. And finally, we don’t have fixed IT infrastructure rather all of our tools are in the cloud (Basecamp, Skype, Google Apps, Crunch, Eventbrite, WordPress etc). What is exciting is that the tools are all there, in a way that they simply weren’t a few years ago, yet I’d be lying if I pretended we don’t spend quite a bit of time integrating different tools, venues and people, but actually it’s not nearly as hard as you might think and certainly a much more efficient way to work.

Which brings me back to my final point about open innovation, where I often here people ask the following “That’s all well and good for big companies like IBM and Procter and Gamble but what about small companies”. In my view small companies are much more agile and adhere to the principals of open innovation all the time, because they have to be responsive to survive. And so open innovation should never be seen as some kind of strategic silver bullet, rather a series of agile behaviours that are much more productive in a networked world.