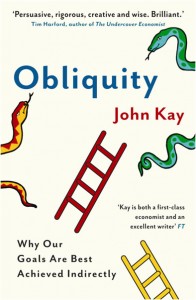 At least so say’s John Kay in his new book Obliquity. He makes a convincing case that our goals are best achieved indirectly. This is contrary to the majority of businesses, economists and policy makers who still favour direct (mechanical and deterministic) strategies – where rationality is prized more highly than good decision making.

He argues that the world is too complex and we rarely have enough information at hand about any specific challenge to tackle it directly. When faced by these ‘unknown unknowns’, there are usually more than one answer to any problem and the outcome of what we do depends on why we do it.

With regards to innovation, we’ve been saying for some time that it is a by-product rather than an end in itself. Somehow by trying to ‘do innovation’ directly you can quite easily kill it, and certainly if you approach it with the wrong mindset. However this presents us with a challenge. Most companies want innovation but is it really possible to become more innovative obliquely?

We believe it is and the answer lies in building a more open business, with a broad and diverse networks of engaged partners. These could be networks of customers or suppliers or partners or anybody with whom you communicate with frequently and may be able to share challenges, data or even resources in a managed way. By becoming more open and by providing a platform for people to participate and interact, then the innovation emerges. But like the unplanned cities, happy people and profitable companies above, innovation isn’t the specific goal.

“Do less and notice more.”

Building an open business is not easy. In fact it runs contrary over a hundred years of business practice which defaults towards a being closed and where economies of scale are largely found internally. The trick is to be engaged and pay attention to what’s going on, and then adapt accordingly and quickly.

Reading this book reminded me of the legendary music producer Brain Eno (who isn’t mentioned in it) who developed his own Oblique Strategies in 1975 for use in writing and producing music. They are essentially a list of over 100 creativity techniques, and you can see them here in full. I have selected a few examples below which are the most generic and therefore more applicable outside of music:

The last one in the above list is the most interesting for me when it comes to open innovation which we often describe as a self-fulfilling prophecy. The first step is always the hardest, and if you don’t believe it will work, you’ll find 1001 reasons not to do it. But if you acknowledge that engaging with the outside world is necessary, even if it is less predictable, then it will succeed. The answers to almost any challenge are already out there somewhere if a) you know where to look and, more importantly b) if you are willing to be more open.

Physicists have been scratching their heads for over a century at the philosophical implications of the wonderfully oblique world of quantum theory. Perhaps it’s time that our business leaders and policy makers abandon their Newtonian world view at last and embrace oblique strategies instead. If they do, then the outcome could be a much greater rate of innovation.