Network Capacity and the New Normal

Starbucks have recently faced a public outcry as it became known that they have not paid corporation tax in the UK for 14 out of the past 15 years. Amplified by media and government interrogations, they now face the rather bizarre choice last week of deciding how much corporation tax to pay, and appear to have concluded, for now at least, that £20m should cover it.

One of the most interesting and underreported things about these recent events is that it appears to signal both the end of concept of shareholder value as the primary measure of company performance as well as the decline in legislation as the primary method of enforcing responsible business behaviour.

Following a fascinating chat about the plight of Starbucks last week with Alastair Dryburgh, author of Everything You Think You Know About Business Is Wrong, we produced the following 2×2 which illustrates how things have evolved: 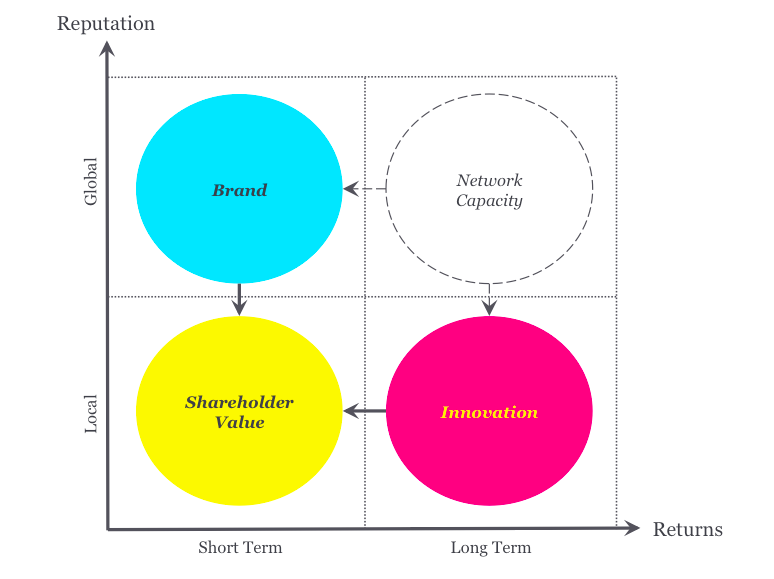 The x-axis reflect short and long term value created – both commercial and social – by and for the organisation. The y-axis is how your organisation is perceived both locally and global. By local, we don’t mean just geographically local. Rather we mean the people and partners (e.g customers, suppliers, shareholders) with whom you have strong ties and existing business relationships. Conversely by global,  we mean people or partners with whom you have weak ties, and perhaps have never worked with or even heard of yet. But within this wider and much more peripheral network lies potentially new customers, future innovation partners, and future investors.

Together these two axes map out four quadrants as follows:

We weren’t exactly sure what this top right quadrant should be called – and would welcome any creative suggestions – but in the absence of any other inspiration we’ll refer to it as Network Capacity, as it reflects what people think and say about you and your organisation. And crucially this network capacity is inextricably linked to the integrity and authenticity of each and every person who is somehow associated with the organisation.

In these economically lean times, some are referring The New Normal i.e. there is no new boom/growth coming any time soon. However I think the real new normal is a shift towards a reputation-centric approach to business. In this networked environment, accountability comes via your partners – both local and global, strong and weak – and not through legislation. And crucually it is openness and transparency, that enables you to build the long term trust and integrity that then drives forward the brand, new innovations, and ultimately shareholder value.

Returning to where we began, with Starbucks, a few years ago their mystarbucksidea site attracted a lot of attention as an early example of crowdsourcing. Whilst it was certainly new and apparently popular, we questioned at the time whether it really represented a new way of working as it was simply an ideas competition for which there was no direct incentive and very limited commitment for Starbucks to act upon those ideas submitted.

“Each year, people will share twice as much information as they share the year before.” Zuckerberg’s Law

And now, just a few years later, even though Starbuck’s customers have probably always expected them to contribute fully to the country where they operate by paying corporation tax, they have only recently had access to the information and crucially have amassed the unprecedented coordinating power to force a rethink of this scale. So whether Starbucks can adjust to the new normal remains to be seen.

So as a first step I think they have no choice but to give to get, and be much more open about their tax position, and look to rebuild trust and network capacity more widely than ever before.

Whether we like it or not, that kind of openness is now becoming the new normal. And whilst it isn’t something most organisations like Starbucks necessarily want to do, or even have to do to comply with the law. Rather it is something they need to do in order to survive and thrive in a connected world.