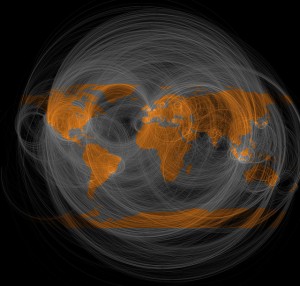 Innovation isn’t just a ‘thing’ that can be manufactured, rather, to quote Verna Allee, it is an emergent property of networks.

Therefore it makes perfect sense for any individual or organization that wants ‘more innovation’ to seek to engage or build a productive and profitable external network. Some people refer to this ‘open innovation’.

The problem is, whilst productive networks can indeed be very powerful, they are generally invisible, have a limited lifespan, and are and are easy to destroy. As the rate of connectivity continues to increase exponentially, we need to come up with new sustainable networked business models. So what can we do?

Following a recent discussion with Cassie Robinson, Ellie Ford and Simone Jaeger, we concocted the bare bones of an idea (I hesitate to call it a business model, but that is indeed what we would like it to become), which we think could just work. It’s not fully formed but we’d like to share it here so that others can help make it better.

We call it, Give to Get.

There are two big issues with networks that must be addressed head on if we can make any progress in this space. Firstly, networks still tend to be largely invisible. Both formal hierarchies and informal networks play equally important roles in how anything happens, from a company merger to playground politics. And yet hierarchies are visible all around us, either through the organization charts that loom large over any company, or through the symbols or power and status that visibly indicate our place in society.

“Over time, hierarchies trump networks, however at any point in time, networks trump hierarchies.” Karen Stephenson

Our informal networks are much harder to see. Who do we go to for advice or information or with a secret? Not necessarily our boss or those ostensibly more powerful than ourselves, rather to those whom we like, respect and trust.

We are now starting to see a whole bunch of interesting tools and apps emerging that help us to visual social networks e.g. how our LinkedIn connections are connected for instance. Companies like Trampoline Systems and Cytoscape will visualize your social networks which is definitely an important first stage in the process, but not sufficient.

Secondly, networks cannot be propped up in perpetuity. And yet many are, but that typically kills their value. Rather, people have to want to come together to meet likeminded people, to learn, or to build something together. In our experience none of these things can be dictated by any kind of formal structure, rather must be (largely) voluntary for the participants and the organisers. However this makes it very hard for any network hosts to justify the time and effort in running and managing them properly.

Most networks essentially work based on the premise that everybody benefits through participation. However, when it comes to trying to monetize this, you can easily kill what makes the network function in the first place. So one of the challenges is coming up with a sustainable business model. The two standard approaches are subscriptions or transaction fees, both of which are fundamentally flawed for the following reasons:

Subscriptions – By charging a subscription you automatically force people to think about what they are getting out of it the moment they start paying/join the network. However any network is by definition a ‘numbers game’ – in other words ‘you have to kiss a lot of frogs to find your prince’. Therefore if you charge subscriptions for people to participate in a network, some people will consider it good or even great value, but at least as many people (and probably the majority) will consider it poor value depending on what they get out of it directly. The cliché is or course, that you get out what you put in, in terms of effort, however if you’ve already paid a subscription you are normally less likely to try as hard.

Transaction fees – Other networks tend to defer payment but request some kind of transaction fee for an introduction or as a percentage of business generated. However it is undeniably true that, regardless how good your network is, you will always make more introductions than the number of direct pieces of business occurring, and so you are bound to have more unhappy customers than happy ones which is also not very sustainable. 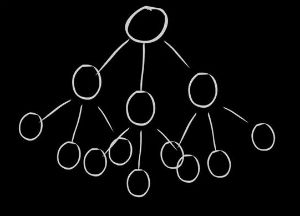 Pyramid schemes get a bad name, but here’s a potential networked business model that essentially operates as an inverted pyramid scheme, that we call it Give to Get.

The basic principal for members of the network is you have to offer to help to two (or more) people with something they couldn’t do without you. It could be help, support, advice, resources, introductions, or possibly even commissioning a piece of business. Each time you do this you get a credit – this could be formalized with some kind of currency or points based system, however are first this is always reputational and informal.

Only once you have built up some credit are you in a position to ask for help from any other member of the group i.e. 2 x Give’s = 1 Get. The only way that this unequal exchange rate can function is if a) people pro-actively try to help each other and b) the network expands over time. Bother of which ought to be a good thing for everyone.

Any network must be underpinned by trust but how are people who don’t follow the spirit of the participation policed or punished. In terms of what to do about ‘freeloaders’ or ‘the tragedy of the commons’, the idealist in me thinks that this ought not to be a big issue as people won’t get the reputational credit (or actual credit) for being helpful unless they deserve it, and so any abuse get’s weeded out very quickly.

However without some kind of social connection it would fall apart, so the network ought not to grow above about 150 people, the Dunbar Number, above which the network should split in two separate networks. This model therefore has the opportunity to grow sustainably, creating a network of networks. I’m not sure whether there is a lower size limit below which this won’t work.

“The value of a network is proportional to the square of the number of connected users of the system.” Metcalfe’s law

This system ought to be better than any kind of transactional or barter system is because you pay forward the benefit to people who need it. If members of the network adopt this as a principal of the network then everybody will prosper. In sociology, this concept is called “generalized reciprocity” or “generalized exchange” and the idea was popularised with the concept (and film) Pay it Forward.

Eating Our Own Dog-Food

Google use the phrase Dog-fooding, by which they mean they ‘eating their own dog-food’ and trying their own innovations before unleashing them on the world.

In the same spirit, we already operate this Give to Get principal informally in many of the things we do. For instance we tend to make much of our Union network, Innovation Service Provider Network, and Lead User Network free to access on this basis. We do charge for other stuff (advice, training, project management etc) as a by-product but I’d really like to try monetizing the networks more directly if we can.

One really interesting example, that I think we could emulate comes from the social currency Flattr, with is a social micropayment system that works as follows:

This becomes a way that writers can start to build up revenues over time for doing what they do, without charging a fee up front that will put most people off from engaging in the first place. In essence your monthly fee becomes your network fee but rather than it becoming an administrative overhead, it actually goes to the people you value, which acts as a further incentive to them to keep on doing what they do.

We intend to try this with one of our existing networks and will see what happens and will report back in due course. In the meantime, we’d really appreciate your builds and comments as ever, or links to other experiments or examples where this Give to Get principal already works.

The top image is a map of the frequency with which people in different places @reply to each other on Twitter. Credit to Eric Fischer under Creative Commons: http://www.flickr.com/photos/walkingsf/