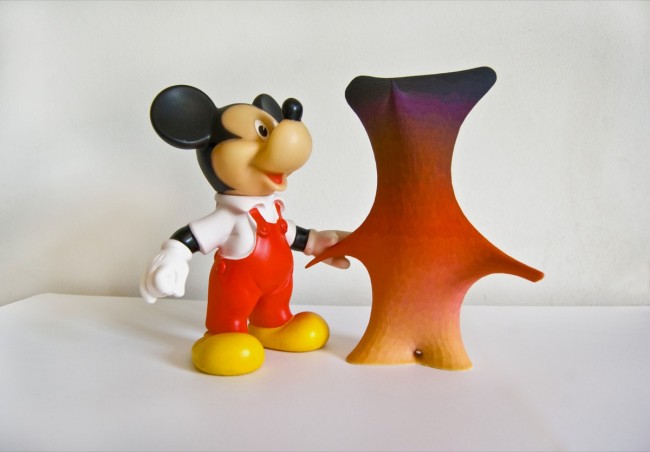 The answer appears to be quite a lot according to Matthew Plummer-Fernandez, an artist who produces 3D prints of digitally scans of physical objects (see pitcture above). When he spoke recently at the Story conference in London, he explained how he became so fascinated with the errors in the copying process that he decided to extenuate these defects, rather than hide them. And he knew he was onto something interesting when his local printer wouldn’t produce copies of a distorted Mickey Mouse due to the potential for copyright infringement.

Copying is itself an important part of the creative and innovation process, and our number one learning strategy according to Mark Earls in his new book Copy, Copy, Copy. You can see a rather entertaining short talk below which gives a flavour of what it’s all about.

“Most people are other people” Oscar Wilde

I particularly like the exercise (11 minutes in) where people have to pass a series of gestures down a line without speaking. When any group attempts this exercise, errors quickly creep in or get amplified and the gestures always end up being very different by the end. It’s a great illustration of how we always underestimate massively how messages get morphed and mangled in the retelling as well.

What both Matthew and Mark are describing is that fact that the act of copying is inherently flawed and fully of mistakes. We misunderstand and misquote each other all of the time, and sometimes what we perceive something very different to what others are saying, which then becomes our reality.

Reinforcing this point, I was interested to hear the actor Mark Rylands, who recently appeared on the BBC’s adaptation of Wolf Hall, was on Radio 4 Desert Island Discs recently (listen here) and talked about how he looks forward to when mistakes happen on stage, for instance when somebody forgets their lines. These mistakes bring all of the performers very much into the moment, and out of any auto-pilot, and have to improvise to bring the performance back. In fact he went to far as to say it’s what he lives for as a performer.

Of course you can make too many mistakes of course. Few people want to go to the theatre to see a performance where the actors forget all of their lines. And of course you want to avoid a situation where the error becomes the norm, rather than the exception. Where there is too much throwing and not enough catching.

“Honour your mistake as a hidden intention.” Brian Eno

However errors, whether they are deliberate or not, leads to new innovation. They draw our attention and sometimes our interest and force us to decide if we like them or not. Darwin taught us that of course and the list of innovations discovered by mistake is long and illustrious, from Penecillin, to the Pace Maker, to Post-It Notes (see here).

One of the reasons why I think mutations and mistakes are particularly helpful to innovation is because it forces you to pay attention to them, and stops you getting too distracted by the future or the past. Mistakes force us to ask what just happened and why? And do we like the error or not?

And by being in the now, is how we innovate today according to the Head of the MIT Media Lab Joi Ito in this TED talk below.

“Remember when people used to try to predict the future?” Skip the future predictions and… create in the moment: building quickly and improving constantly, without waiting for permission or for proof that you have the right idea. This kind of bottom-up innovation is seen in the most fascinating, futuristic projects emerging today, and it starts, with being open and alert to what’s going on around you right now. Don’t be a futurist, be a now-ist.” Joi Ito

It can be helpful to prototype any idea as much as possible. Prototyping is a form of copying. As the process of building it will, either by accident or design, flush out problems to address or new opportunities to make it even better.

There can be a half way house where you create a safe space for collaboration, and ultimately copying. We call it an Innovation Airlock and is a remarkably simple process that is easy to implement, and helps build trust, accelerate ideas, and align expectations between partners. For more details see here.

So, we started this post by asking how much do you need to change an idea before you can call it your own? The question is of course paradoxical. You cannot own an idea. There is an infinite amount of them and on their own have no inherent value. It’s what you do with them that matters. And that’s why, when investing in innovation, you should always back the team not the idea. A great team with a mediocre idea is much more likely to succeed than a mediocre team with a great idea.

In summary we do not allow ourselves to copy and make mistakes nearly enough. But as a result we don’t allow ourselves enough opportunities to experiment and learn. So what are we waiting for. Start copying now and always make new mistakes. Learn from them. Incorporate them. Celebrate them. Respond to them. If you do, then innovation will follow.