How open is too open? Is full transparency necessary or naive? With the continued rise of all things open in recent years – open source, open data, open government, open innovation – some are asking whether some things are best left secret after all?

Attitudes towards openness have become much more nuanced of late. Don Tapscott, author of Wikinomics, a champion of the naked corporation, has recently been advocating personal privacy [ref]. The wikileaks saga, until recently a bold new challenge to more open and accountable government, has been mired in controversy. Big and open data is an exciting trend but few have realised how to benefit fully from it yet. And even successful open innovation pioneers such as Procter and Gamble have struggled to create the next generation of breakthrough brands of late and are starting to wonder “what’s next?” [ref].

So was the recent ‘open meme’ mis-guided after all or is something else interesting going on instead? I believe that these recent challenges to an ever increasingly open economy and society are highlighting some fascinating questions and in fact new organisational models are slowly emerging.

One of the most common misunderstandings about open source software, which sparked the whole shift towards greater openness, is that somehow order emerges effortlessly from chaos. However nothing could be further from the truth. When Jimmy Wales is asked to describe how Wikipedia makes decisions [ref] he likes to say its one part anarchy (anyone can do whatever they like); one part democracy (disputes are settled by votes); one part meritocracy (the best ideas win out); one part aristocracy (people who have standing in the community have more clout); one part monarchy (that is him and he uses that power rarely.)

So to paraphrase Jimmy, yes order can emerge from chaos but it requires very different leadership styles and governance to be present simultaneously, not to mention a massive amount of hard work, constructive debate, and passionate and engaged people. In fact, all of the open source communities we have investigated are massively pinned down and process driven as well. A nice example comes from a new collaborative project management tool we’ve just started using called Better Means. See below a nice video overview (if a little dry) which describes how they structure their community using an open enterprise governance model

With an opt-in engagement for anyone, peer review contributions and a reputation based system, this open enterprise governance model is an example of a meritocratic way of running a project or an organisation, which is in fact fully open but quite sophisticated in terms of how it builds layers of reciprocal trust and knowledge.

And this onion skin model of Users > Contributors > Members > Core Team actually mirrors rather nicely how we operate 100%Open. See below for example of a recent chart produced by Murray Sim, our head of design which shows the first 2 layers, but could easily be supplemented to show wider partners, client and users as well. 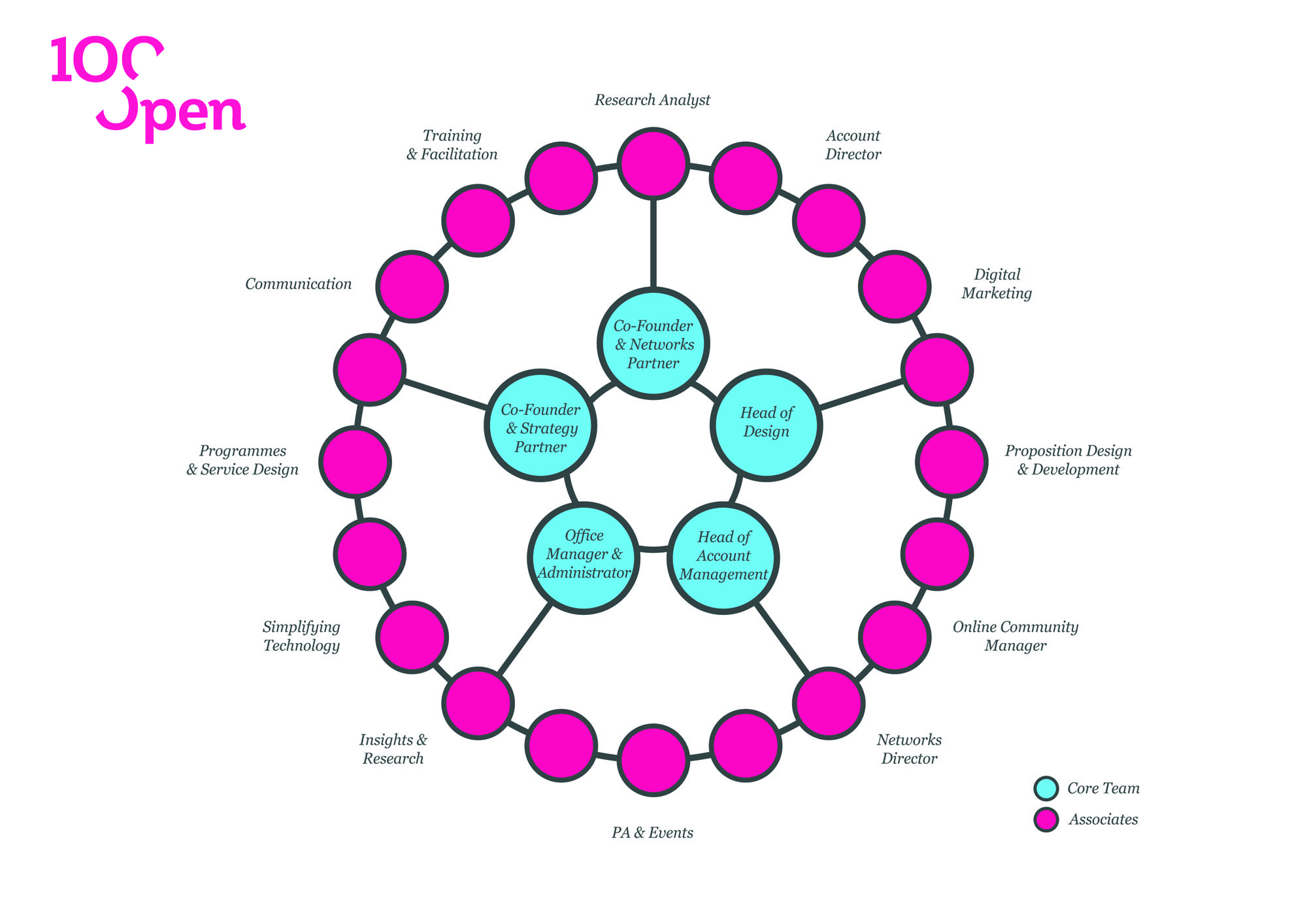 And whilst we are called 100%Open, when we first set up the company I did raise the question whether the name was really appropriate. Are we really advocating totally open organisations I asked? Surely 93% open is more accurate description of how open an organisation ought to be I only half-jokingly argued. We are not simply going to share everything to everyone at any point, are we? David, my business partner, with a background in advertising quite vehemently shot down that overly analytical suggestion, citing that 100%Open is a much better name. I must confess that I had to agree and so we went with it and by now I’ve lost count of the number of times that in meetings people say things like “To be 100%Open with you…” and then go on to share something interesting, insightful or confidential.By now the name actually does apply to us wholly. We’d be happy to share almost anything with anyone – from what we earn, to what we learn – if we felt that there was reciprocal trust and genuine interest in sharing.

Another common misconception is that opening up is some how voluntary. Something we perhaps choose to do due to idealistic ideals about how the world should be, rather than how it is. However I think this is dangerously misguided. We must start to work on the basis that anything that can be shared will be shared and so openness is not a nice-to-have, rather a necessity. However those who do so proactively and practically will find it much more productive and less painful than those who pretend they don’t need to.

So I no longer think 93% open is a more accurate name for our business. Rather I believe we need to recreate organisations – businesses, charities, governments, institutions – that are open for all to engage and participate, but trust and knowledge and experience is carefully structured in layers. So I do welcome a clearer governance model, criteria and process, as described in the video above, which makes clear the parameters and conditions required for an open enterprise. And we are trying to practice what we preach at 100%Open and I’m excited by the prospect of how scalable and applicable it might be to others as well.