"Your responses will directly influence the way that we provide support in Doncaster". 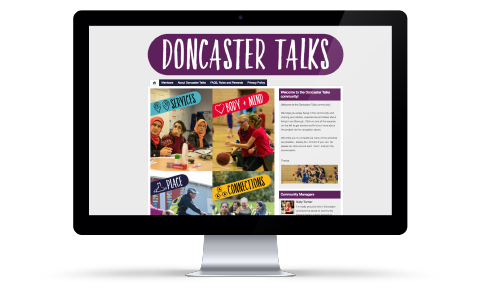 Our brief: Involve Doncastrians in solving their own health issues and train staff in insight techniques.

What we did: We set up Doncaster Talks with partner agency Uscreates. This took the form of an idea and insight gathering online Crowd platform for residents of the Metropolitan Borough of Doncaster, a place with significant and intractable health issues.

We used a proprietary platform that allowed bitesized public or private insight gathering techniques such as ideation, surveying and mapping. The platform was branded with Doncaster Talks, and based on previous Uscreates research, and our discussions in a Challenge Design Jam, divided into four main areas for discussion or insight: Services, Body and Mind, Connections, and Place.

We set up a system to ascertain residency of Doncaster or within the Metropolitan Borough and asked the growing online community to amplify the project to their friends, family and neighbours to build up our crowd. Once ready, we researched motivations for, and barriers to, good health and stimulated fresh ideas for increasing health and wellbeing in Doncaster. This was to inform Doncaster Council and NHS Doncaster with qualitative insights so that they might work together effectively in the future.

What happened: In 100 days the project reached over 200 residents and resulted in thousands of ideas, insights, comments and survey replies. 91% of those that took part expressed an interest in taking part in such a community in the future. Excitingly, 55% made changes to their own health behaviour because they had taken part in Doncaster talks, including volunteering to work with lonely people and altering their own eating and exercise habits. Doncaster Council were provided with four strong prototype ideas, based on the community input, plus a wealth of evidence for many more beneficial changes to come. The report was very well received by the Borough’s Health and Wellbeing Board. Four proposed interventions, including an exciting idea called The Working People’s Club, are likely to be taken forward by the community themselves. One key theme that emerged was the social element and in particular connectedness through physical activity. The Borough has since won a bid to Sport England for a community focused Local Delivery Pilot.

The Uscreates and 100%Open Crowd approach is now seen as best practice in the borough and will be used for further projects in Doncaster in a long term partnership. The approach has been influential and inspired the city and NHS to think differently for the future of Doncaster.

Back See all 'crowd' work